Professional sports teams know how to engage a crowd – both in stadiums and on social media. You can also try to market your social media platforms, and try to increase engagement by incorporating the use of engagement tools for various platforms, for example, Quantum Marketer talks about this tool that can help with running Instagram marketing campaigns on autopilot and much more! So, considering many professional sports teams take to social media to engage with their fans, who are the best pro sports teams to follow on Twitter, Instagram, Facebook, and YouTube? We asked, and you answered. Now, I wonder how many of you took your choices and used them to go through the xe88 register process and make some extra cash? We all know sports seasons are prime betting seasons too.

We broke down our top picks in the NFL, NBA, MLB, NHL and MLS, and you voted for your favorite teams. Now, we’ve put together the ultimate list of the best pro sports teams on social media based on your votes! A lot of sport viewers will be familiar with betting on their favorite teams, but if you’re not and you think you’d like to try your hand at trying to earn a few extra dollars, you could head over to betting.com for some betting tips to get you started.

Scroll through the examples below to see why these teams rank the list, click the links to follow them, and take notes – these guys are all-stars!

Jump to a league:

Do you agree with these picks? Did we miss anyone? Tweet your favorites @psforbrands!

The Carolina Panthers, the Baltimore Ravens and the Minnesota Vikings crushed it in our fan polls – these are teams to follow for inspiration and entertainment. Check out all of our top social media picks in the NFL.

The Carolina Panthers have one of the most fun, clever social media personalities in the league.

Check out how the team poked fun at the Jaguars on Earth Day:

.@Jaguars Not always though pic.twitter.com/ybpycrYXGO

And earlier this year, the team hid the lyrics of the “Fresh Prince of Bel-Air” theme song in their tweets for days (it took a lot of discipline!). When they revealed their secret, Twitter and the media went crazy. Here are a few of the tweets:

A look at the #Panthers running backs in action ðŸ’¥

Called upon to fill the void left by A.J. Klein, David Mayo is ready to step up

RT for a chance to win a #Panthers mini helmet! We’ll pick a random winner by 3PM today. pic.twitter.com/WOiPFsLSiC

The Ravens digital media team knows how to catch their fans’ attention on social media while their team dominates on the field. They use a lightning-fast photo workflow to share photos of big moments in the game right after they happen.

This also helps them create score updates that not only have the current score, but also have a fresh, relevant photo from the current game.

We’re heading to the 4th. pic.twitter.com/mk67j2HP9c

Oh, the Minnesota Vikings – where to start? I don’t even know how to narrow down all the reasons you should follow the Vikings on social media. From off-beat videos like the #VikingsQuest series (seemingly a derivative of the popular team’s popular Vinekings videos), to fun cartoons, to photos and videos that show you what it’s really like to catch a game at the team’s new M&T Bank Stadium, this team knows what they’re doing.

Don’t miss the posts by the Vikings Instagram Group – photos of a Vikings helmet taken by photographers who live in the city where the Vikings will play their next away game.

The quest continues on to Chicago. Which team will come out on top? #VikingQuest #Skol

See all of Sunday in less than six seconds. #TBvsMIN

Say hello to the team’s newest wide retriever! Tag a friend who would love this week’s #VikingsIG.(ðŸ”·: @livingthatgoldenlife)

The Atlanta Hawks and the Sacramento Kings were definitely the teams to beat in our polls – and it’s no surprise they dominated! Plus, we got a ton of wildcard votes for the Portland Trail Blazers, a team that deserves to rank this ultimate list. Check out all of our top social media picks in the
NBA.

The Atlanta Hawks give fans direct access to the team, whether it’s through behind the scenes content or live video chats with players. Plus, they use social media to spark a conversation with their fans.

They use Facebook Live to host “Hawk Hangouts” where fans can ask questions and talk one-on-one with their favorite players.

The Sacramento Kings were named Fast Company’s “Most Innovative Company in Sports,” and it’s no wonder. The team uses cutting-edge technology ranging from 360-degree video to augmented reality to connect with fans and tell their stories.

The Kings’ “Sacramento Proud” campaign resonated with fans when the team opened the Golden 1 Center. Now, they’re building on the campaign’s momentum, with “Where Proud Is King.”

Inspired by the Past. Created for the Future. #NewEraOfProud

Kings Basketball Is Back ðŸ‘‘ (ðŸ”Š@groovyq)

When we broke down the best social media teams in the NBA, I have to admit, we missed one. But thanks to your wildcard votes, the Portland Trail Blazers rank our ultimate list of the best pro sports teams on social media, and rightly so!

This team has stunning photography (both studio and game action), consistent branding and a distinct personality that resonates with fans. But one way the Trail Blazers really shine is with – drumroll please -GIFs. We all love GIFs, and this team knows how to turn everything from audience reactions to funny court side moments into the perfect GIF. They’re paying attention to what other teams might miss, and the result is a unique, engaging feed that fans love.

The inbound is under review. pic.twitter.com/OxRcbVYDiD

The shoes.
Probably the shoes.
Gotta. Be. The. Shoes. ðŸ‘Ÿ

Not only are the Houston Astros World Series champions, but they also took home the top prize in our polls, along with the Colorado Rockies. Check out all of our top social media picks in the MLB.

As the Astros made a run for their first World Series title, they won over social media with their “Earn History” campaign. They used branded graphics and motion graphics, and tailored the content to perform well on each platform.

Even when they didn’t use a graphic, they added a subtle branded watermark to their photos. The consistent branding made their posts feel like they were part of one cohesive narrative.

Now, the World Series champions have made a small tweak to the campaign, changing its name to, “Earned History.”

The Colorado Rockies use their social media channels to give fans content they couldn’t get anywhere else. They use a real-time photo workflow to get photos from the field to social media during games. Plus, they have a unique voice they use to build strong connections with fans.

Not to mention, they’ve helped spark some of the best viral Twitter battles of all time, including a Twitter snowball fight and a singalong to “Total Eclipse of the Heart.”

On a scale of to to to to , how are you feeling right now? Don’t forget to enjoy the moment!#Rocktober pic.twitter.com/210rdKxsMQ

Speaking of personality – the Vegas Golden Knights. This expansion team has already made history by becoming the first NHL team to win six of their first seven games in an inaugural season. And off the ice, they’re scoring on social media.

Watching their feeds is like talking hockey with a friend. They have a snarky personality that was well-defined and noticeable from the beginning. It’s entertaining Golden Knights fans and making waves across the country.

The single game ticket on-sale date (AKA when Canadians who said Vegas didn’t deserve a team start booking Vegas tripsðŸ™„) will be mid-August.

It’s not even just us saying it. Our friends at https://t.co/xP0b2zUqpf have given us some praise also.

The Blackhawks have more followers on Twitter and Facebook than any other NHL team. They know how to tell great stories in innovative ways, whether they’re covering a game, throwing it back to a big play, or honoring a former player.

Check out some of the moving ways they honored Bryan Bickell after he signed a one-day contract to retire as a Blackhawk (Bickell was traded to the Hurricanes in 2016, and decided to retire from the NHL after he was diagnosed with multiple sclerosis).

Buckle up! @jtootoo22 rocks @Snapchat Specs to bring you along for warmups at #TCF2017!

On this day in 2009, the #Blackhawks staged their biggest comeback in regular-season history by overcoming a 5-0 deficit to defeat Calgary 6ï¸âƒ£-5ï¸âƒ£ in OT #tbt

Bicks retires a Blackhawk. We couldn’t have it any other way. #BickellBrave Swipe to follow @bbickell on the day of his retirement press conference.

The New York Red Bulls and the Seattle Sounders are producing incredible content for social media, so it’s no surprise they won out in the polls to rank this ultimate list. Check out all of our top social media picks in Major League Soccer.

The New York Red Bulls are creating binge-worthy content their fans are sure to love. They are giving fans exactly what no other outlet can give them – access.

Their series, “All Access,” is exactly that – a behind the scenes pass that takes fans to warm-ups, to the field, to the post-game huddle and more. They’re packed with soundbites from the players and the coaches. These videos give you a comprehensive look at the game that you just couldn’t get anywhere else.

The Red Bulls also produce very personal stories about their players. Watching the five-part series, “Going Home with Luis Robles,” is like watching a short documentary film with the cool factor of MTV Cribs.

The Seattle Sounders have incredible photography and video. They know what performs best on each platform, and they tailor their content accordingly. Not only does this help their content stand out, but it also gives the team a broader range of ways to use their visual assets.

On Twitter, their stunning photos have a consistent look and feel. Plus, the images focus on the emotion, rather than just the game action, bringing you closer to the players.

On Instagram, the team is using vertical photos and videos – a great way to take up more real estate in your feed – like the eye-catching animated video below.

Now that you’re feeling inspired by these all-star social media teams, check out these stories on pro sports social media: 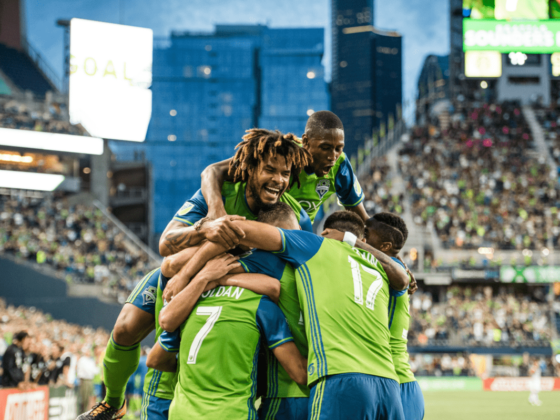 The Best MLS Teams to Follow on Social Media The 15 Best Colleges and Universities to Follow on Social Media